Just added to your cart

Should I get a dongle (tl;dr version)?

What are the benefits of using a dongle?

What are the benefits of not using a dongle?

The primary benefit of not using a dongle is convenience when traveling with a keyboard. You don't have to carry around a dongle and you won't need it plugged into your laptop, tablet, or phone.

This comes at the cost of a much shorter battery life for the left half as it needs to be a "central" (see below) rather than a "peripheral". The expected battery life of the left central half is around 1 month. That is a rough estimate as the battery life can be longer with the proper sleep settings but can also be shorter if RGB underglow is used extensively. The right half battery would still expected to last around 9 months.

What is a Bluetooth central?

With wireless split keyboards, a central is needed to coordinate keys pressed on the two halves. If the two keyboard halves both connected directly to the user's computer without a central to coordinate everything, it would not be possible to have basic functionality such as toggling a layer with a key on one half followed by pressing a key on the other half.

Is a dongle recommended?

A dongle is strongly recommended if you plan on using your keyboard at home or in an office. For this reason, a dongle is listed as "recommended" for the ErgoDox Wireless Lite and Pro.

If you plan on traveling frequently with your keyboard, a dongleless setup should definitely be considered for maximum convenience. For this reason, a dongle is listed as "optional" for the ErgoDoxLP Wireless.

Users who want both portability and a longer battery life should consider using a dongle but having the dongle plugged into a portable charger in their backpack. The keyboard halves can send data to the dongle central, which would then send keypresses wirelessly to the laptop, tablet, or phone.

How do keyboard halves communicate when using a dongle?

When the split keyboard is used with a dongle, the dongle serves as the central and the two keyboard halves are peripherals" In such a setup, the two peripheral halves send keypresses to the dongle central and dongle is responsible for handling all the keymap logic.

The dongle can be plugged into one computer and used like a standard USB keyboard. 5 additional devices (computers, tablets, phones, etc) can connect wireless to the dongle via Bluetooth.

How do keyboard halves communicate when not using a dongle?

Without a dongle, the left half is the central and the right half is a peripheral. In such a setup, the right peripheral half sends keypresses to the left central half.

5 devices (computers, tablets, phones, etc) can connect wireless to the left central half via Bluetooth. The central half can also be plugged into a computer and used like a standard USB keyboard. 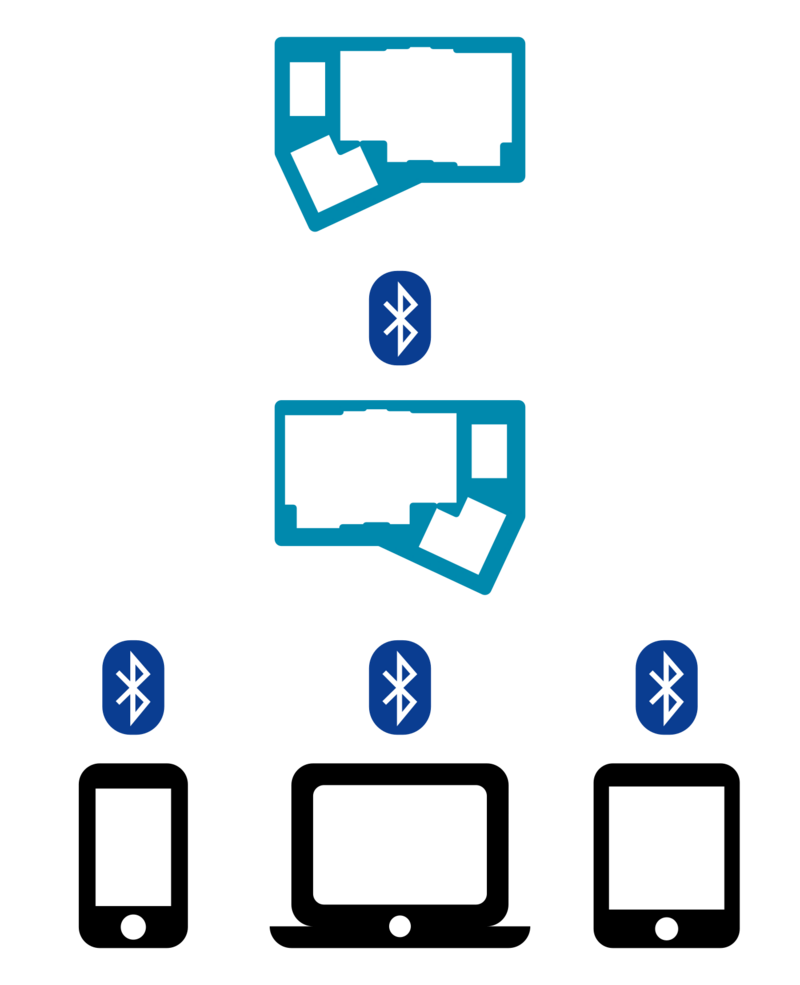 Is it possible to switch between using and not using a dongle?

Yes, you can switch between the two setups. However that requires resetting all the Bluetooth bonds and reflashing everything. The process can take few minutes so making the change frequently is not recommended.

It's currently not possible to dynamically select between using the dongle and the left half as the central. This is a firmware limitation and may change in the future though at the moment there are no concrete plans to implement such a feature.